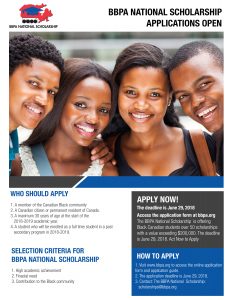 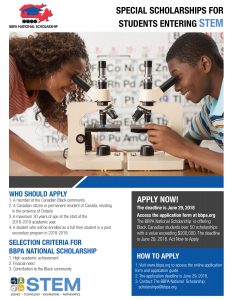 The BBPA National Scholarship Fund was established in 1986 and is dedicated to supporting and promoting the achievement of academic excellence by Black Canadian youth through an annual scholarship program.

The Fund is managed by a volunteer board of trustees appointed by the Black Business and Professional Association (BBPA) and is operated separately from the Harry Jerome Awards and all other BBPA activities.

The Fund receives financial donations from corporations and individuals that share its mission to support the education and development of Canada’s future leaders, through assisting Black youth in their attainment of post-secondary education. Donors may contribute to the General Fund, used to fund scholarships and assist us in covering our operating costs; or to the Endowment Fund, established to provide a secure financial base for the expansion of the annual scholarships and to create a scholarship program that can be maintained in perpetuity

Scholarships are awarded in three categories:

BBPA Legacy Scholarships, in the names of Black Canadians who enriched Canada with their contributions in the arts, the professions, science, business, technology, politics and other areas of endeavour;

First Generation Scholarships, funded by the investment income from a grant from the Government of Ontario and available exclusively to students residing in Ontario that are the first in their family to attend university or college; and

The Legacy Scholarships are funded from donations to the General Fund and investment income from the Endowment Fund.

In 2016 the BBPA granted 46 new and renewable scholarships valued close to $150,000.  Over the past 30 years the BBPA Scholarship Fund granted approximately 950 scholarships totalling $3.6 million. For 2016 we welcomed the following first time donors: The Toronto Police Chief Mark Saunders, Sun and Partners and D’Juvayne Christian. We are especially grateful to those organizations and individuals who have made a generous gift to our endowment fund. Thanks to Dr. Miriam Rossi and Renato Rossi for their generosity in funding four or more scholarships consistently, for so many years.  We thank all our sponsors for their contributions to the education of Black youth through the BBPA National Scholarships.

First Generation Scholarships of $1,000.00 to $2,000.00 are available to students whose parents have not participated in post-secondary education studies. Qualified students must be residents of Ontario and must meet all other eligibility criteria of the BBPA National scholarships. First Generation Scholarships are funded by an endowment established with the proceeds of a grant from the Government of Ontario.

THE BEST LIFESTYLE RESIDENCE SCHOLARSHIP (1) This $1,500.00 scholarship is sponsored by Ms. Pauline Christian, President of the BBPA in memory of her mother the late Queen Victoria Wellington-Wint. Scholarship to be awarded to a student with strong academics, health/fitness consciousness, demonstrated financial need, and who has made a recognized contribution in his/her community. Ms. Christian will participate in making the decision regarding the recipient of her scholarship.

THE D’JUVAYNE CHRISTIAN (1) is a $1000.oo scholarship sponsored by D’Juvayne Christian, for a student interested in entrepreneurship or Real Estate Investments. The student must be entering first year postsecondary studies, with strong community involvement, academic record and financial need, in this order stated. The successful applicant would meet the BBPA’s National Scholarship Fund eligibility criteria as well. Mr. Christian will participate in making the decision regarding the recipient of his scholarship.

THE STERLING DENTAL SCHOLARSHIP (1) is a $2,000.00 scholarship sponsored by Sterling Dental, for a student interested in science and sports, who has strong academics, financial need, and has made a contribution in the community. A balanced and rounded individual.

THE HARRY JEROME LEGACY SCHOLARSHIP (1) is a $2000.00 scholarship sponsored by the BBPA to honour Harry Jerome, an outstanding Black Canadian who was an Olympian, Officer of the Order of Canada and world renowned for his sports achievements. Equally respected for his dedication to educational and athletic opportunities for youth, Mr. Jerome was invited by Prime Minister Pierre Elliott Trudeau to help create and serve as a senior administrator in the Canadian Ministry of Sport. Reflecting this criteria, this scholarship is to be awarded to an applicant 18 years or older who has demonstrated superior achievement in academics, athletics and his/her involvement in helping those who need, assistance or support in the Black community.

THE DR. ANDERSON ABBOTT SCHOLARSHIP (1) The Dr. Anderson Abbott Scholarship, for $4,000.00, is for a University of Toronto student enrolled in a Health Science program at the University of Toronto. The University established the scholarship in recognition of Dr. Abbott, the first Black medical doctor to graduate from a Canadian university and an army physician/surgeon for the North in the American Civil War. For his dedication and valor, he was given a special gift, President Lincoln’s Inauguration Shawl, by Mary Todd Lincoln, the wife of the U.S.

THE ROBERT SUTHERLAND/HARRY JEROME ENTRANCE AWARD: established in 2008 by Queen’s University in cooperation with the Black Business and Professional Association (BBPA),and the former Harry Jerome Scholarship program, to honour Robert Sutherland (BA, 1852), the first student of African heritage to graduate from Queen’s University, Ontario, Canada. As per Queen’s University, the funded scholarship is awarded to a Black student entering the first year of any direct-entry undergraduate degree program at Queen’s University, on the basis of demonstrated financial need, academic achievement and contribution to the community or other volunteer activities.

Application should be made to the Associate University Registrar (Student Awards) by March 1. Value $5,000.00 renewable for three years, providing a satisfactory academic average is maintained each year and financial need continues. Students apply to Queen’s University directly and are chosen by a committee of the Student Awards Office at Queen’s University.

THE BANK OF MONTREAL SCHOLARSHIPS (2) Two scholarships, for $5,000.00 each, are sponsored by the Bank of Montreal, each to be awarded to a student with academic achievement, financial need, demonstrated social responsibility through community work, and an interest in a business career.

THE C.I.B.C. SCHOLARSHIP (1) This scholarship of $5,000.00, sponsored by CIBC, is to be awarded to a student with demonstrated social responsibility through work in the community.

THE ROYAL BANK SCHOLARSHIPS (2) Sponsored by the Royal Bank of Canada, two scholarships in the amount of $4,000.00 each are offered.

Successful candidates may be enrolled in a course of study leading to a bachelor’s or master’s degree in Business Administration or a related program.

*THE SCOTIABANK SCHOLARSHIPS (2) The Bank of Nova Scotia sponsors two scholarships of $5,000.00 each that are to be awarded to two students attending a Canadian college or university enrolled in Business studies. They should have strong academics, demonstrated financial need, leadership skills and commitment to helping in their community.

THE ALRICA GORDON SCHOLARSHIP for $2,000.00, (1) is sponsored by Mr. Konata Lake, former recipient of more than one BBPA scholarship. He sponsors the scholarship in honour of his mother, Mrs. Gordon, for her support through his many years of studies. Mr. Lake has asked that the scholarship recipient be a graduate of C.I., C.W. Jeffreys, Emery Collegiate Institute, or of other Jane-Finch at-risk high schools in Toronto.

THE DR. OUIDA M. WRIGHT MEMORIAL SCHOLARSHIP (1) Sponsored by Dr. Leebert A. Wright in the name of the late Dr. Ouida M. Wright, who had a lifelong aspiration for higher education and who aided and inspired thousands of young people to make education a worthwhile goal. This $4,500.00 scholarship will be awarded to a female student who has been accepted into a post-secondary degree program in one of the sciences such as mathematics, physics, chemistry, biology or medicine.

THE TORONTO POLICE CHIEF MARK SAUNDERS SCHOLARSHIP (1), for $1,000.00, sponsored by the Toronto Police Police Chief Mark Saunders, Toronto Police Service’s first Black Chief of Police. The scholarship is awarded to a student enrolled at an accredited university or college in Canada as a full-time student in diploma or degree program leading to a career in law enforcement.

THE SIX BBPA LEGACY SCHOLARSHIPS (6) , each for $1000 – $2,000.00, are sponsored by the BBPA and were established to acknowledge important contributions by members of our community which have enhanced the qualities of our everyday life, in the arts, in the fields of law, education, communication science, government, as well as in athletics, research, and entrepreneurship. BBPA Legacy Scholarships are funded by general donations and investment income from the endowment fund.:

FIRST GENERATION SCHOLARSHIPS: First Generation Scholarships of $1,000.00 – $2,000.00 are available to students whose parents have not participated in post-secondary education studies are granted to individuals who are the first in his/her family to attend university. Students must be residents of Ontario and must meet all other eligibility criteria of the BBPA National scholarships. First Generation Scholarships are funded by an endowment established with the proceeds of a grant from the Government of Ontario.

THE HARRY GAIREY SCHOLARSHIP: (1) for $2,000.00, is sponsored by the BBPA, in honour of Mr. Gairey’s important role as a community activist and his many valuable contributions to the Black community over the years.

THE HUMANITARIAN SCHOLARSHIP (1) $1,000.00 is for a student at risk of being forced to leave his/her studies due to exceptional financial need and no possibility of other financial help. Sponsored by BBPA.

THE MADELINE BLACKMAN SCHOLARSHIP is sponsored by a group of Antiguans and Barbudans forming the Madeline Blackman Scholarship Committee. A $3000 scholarship is granted to a student that is from the Antigua and Barbuda community, has a positive academic performance, studies in the arts or fine arts, and has a financial need.

Donate to the BBPA National Scholarships and Support Tomorrow’s Leaders!